Giovanni Damiani, born in Trieste 1972, received his degree with honours at the IUAV University of Architecture in Venice where he also attended a doctorate research program at the department of History. He is currently teaching Theory of the contemporary project at the Faculty of Architecture in Trieste and in the European Cities program at Kent State University; he collaborates and caries out research projects at the Milan Politecnico in History of Contemporary Architecture and at the Turin Politecnico in the laboratory-courses for Urban Project Planning.
He studies and holds seminars and conferences in many Italian and North American Universities- among which Columbia University, Harvard, Getty Center, Université de Montreal, and CCA.
He has published articles and essays for catalogues, magazines and various books, among them, Bernard Tschumi for the Skira\Rizzoli publishing house (English version by Themes & Hudson), translation of Architecture and Disjunction for Pendragon (with Ruben Baiocco) and Paolo Ceccon, Spazi altri ed eventuali for Gangemi and Le parole dell’architettura a critical
anthology of the second half of the Twentieth Century with Marco Biraghi for Einaudi.
He is currently working on a monographic study on Elia Zenghelis for Skira Editors and His historic research and critical studies are mainly centred on the Second Half of the 20th century like Team X, Independent Group, James Stirling, Peter Eisenman and the NY Five.
He carries out his work as a freelance architect between Venice and Trieste, working both as a project designer and as a consultant for local public administrations, offices and foundations. He has received awards of recognition both for his architecture projects as well as for his work as consultant.
He has collaborated in setting up exhibition arrangements, installations, and interiors, and continues to work frequently with important Architecture firms and Engineering company. 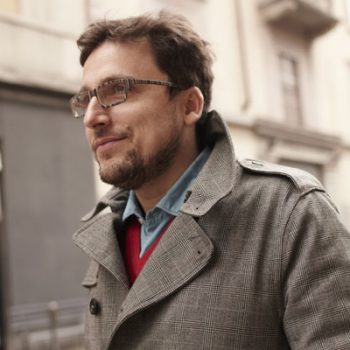